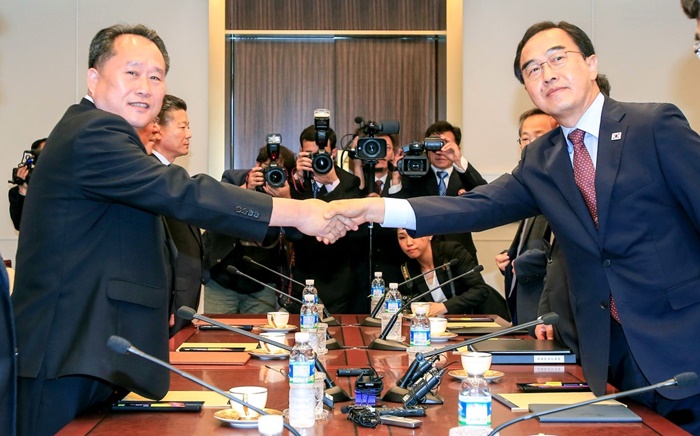 South and North Korea agreed to hold multiple talks to discuss military issues, family reunions and sporting matches in June to implement the Panmunjeom Declaration adopted at the 2018 Inter-Korean Summit.

Teams of officials from two Koreas held high-level talks at the Panmunjeom Peace House on June 1. Korean Minister of Unification Cho Myoung Gyon and North Korean Chairman Ri Son Kwon of the Committee for the Peaceful Reunification of Korea announced a joint press statement that lists a detailed schedule for future meetings.

The two sides agreed to have general-level military talks on June 14 at the Tongilgak building in Pamnumjeom to ease tensions between the two sides.

They also agreed to hold a Red Cross meeting at the resort on Geumgangsan Mountain in North Korea on June 22 to discuss the reunion of separated families. They also scheduled talks for a basketball match between the two Koreas and their joint participation in the 2018 Asian Games on June 18.

The two sides also agree to open a liaison office in Gaeseong, North Korea, at an early date.

The two officials also agreed to hold regular high-level talks to check on progress of the implementation of the Panmunjeom Declaration. The next high-level talks will he held after monitoring the working-level talks in each field.

“We agreed to not hold any joint event to celebrate the first-ever summit held on June 15,” said Minister Cho during a press briefing after the meeting. “As we discussed specific dates, programs and locations, we figured that the South and the North both have important scheduled items near that date. We will discuss further by exchanging documents to decide how to commemorate the special day.”