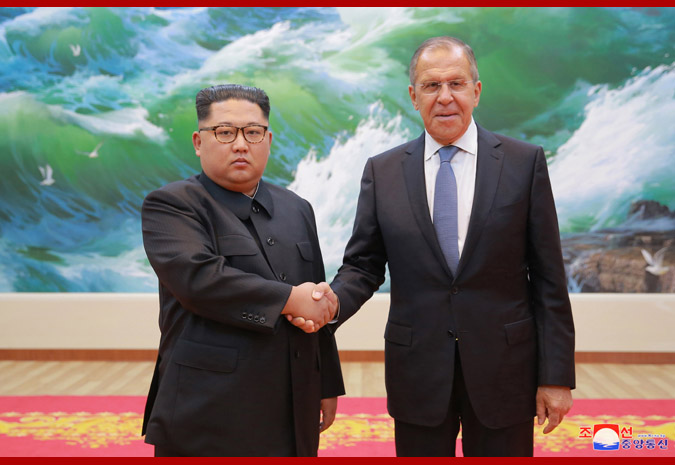 Exchanged at the conversation were opinions and views of the top leaderships of the DPRK and Russia on the trend of the situation and prospect of the Korean peninsula and the region, the recent world focus. Also discussed were the issues of further expanding and developing the relations of political and economic cooperation between the two countries and closely cooperating with each other.
Noting with high appreciation that the situation in the Korean peninsula and the region has entered a phase of stability thanks to the DPRK, which has taken practical steps while successfully steering the relations between the north and the south of Korea and between the DPRK and the U.S., Lavrov said that Russia fully supports the DPRK’s determination and stand on the DPRK-U.S. summit high on the agenda and the denuclearization of the Korean peninsula and wishes for good successes.
Kim Jong Un said that the DPRK’s will for denuclearization of the Korean peninsula still remains unchanged and consistent and fixed and he hoped that the DPRK-U.S. relations and the denuclearization of the Korean peninsula will be solved on a stage-by-stage basis by finding a solution to meet the interests of each other through a new method in a new era and under a new situation and the solution of the issues will progress through effective and constructive dialogue and negotiation.
Agreed at the conversation was to invigorate high-level visits, activate exchange and cooperation in different fields and, especially, realize the meeting between the top leaders of the DPRK and Russia this year marking the 70th anniversary of the establishment of bilateral diplomatic relations so as to continue to develop the strategic and traditional relations between the two countries in the interests of both sides and in keeping with the requirement of a new era.