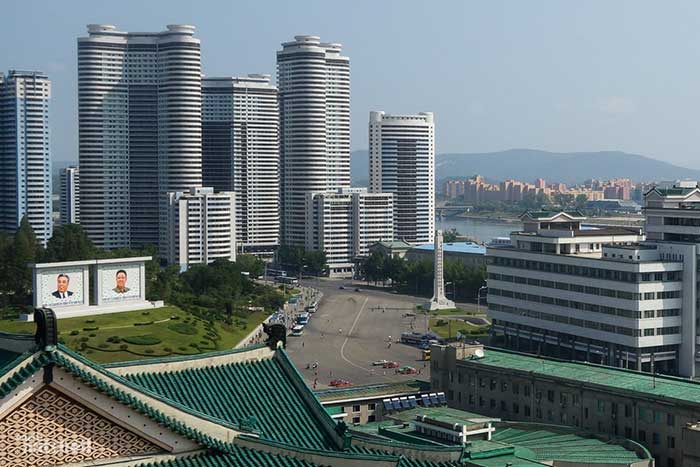 South President Moon Jae-in ordered a joint inter-Korean research effort to examine future economic cooperation ahead of the anticipated lifting of international sanctions against North Korea following an upcoming North Korea-US summit, which will follow up the inter-Korean summit that was held on Apr. 27.

Speaking on Apr. 30 at the first Blue House senior secretaries’ and aides’ meeting since the inter-Korean summit, President Moon said he “look[ed] forward to us being able to carry out a joint inter-Korean research effort for implementation of the Oct. 4 Summit Declaration [of 2007] and inter-Korean economic cooperation,” a key Blue House official reported.“He was saying we need joint research to examine what kinds of economic cooperation the South and North can engage in ahead of [sanctions against North Korea] being lifted,” the official explained.

The materials reportedly contained details on power plant construction and other economic cooperation measures that could be implemented once inter-Korean relations gain momentum and sanctions against North Korea are lifted. During the Apr. 30 meeting, President Moon described the Panmunjeom Declaration as “a peace declaration proclaiming to the world that there will be no more threat of war or nuclear weapons on the Korean Peninsula.”

President Moon Jae-in gave the North’s leader Kim Jong-un a USB drive containing a “New Economic Map of the Korean Peninsula” at the fortified border village of Panmunjom on April 27.
The initiative included three economic belts – one connecting the west coast of the peninsula to China, making the region a centre of logistics; one connecting the east coast to Russia for energy cooperation and one on the current border to promote tourism.
Whilst sources at the South Korean presidential office did not give further details about the information contained in the drive, they confirmed that the plan was in line with Moon’s “Berlin speech” last year when he outlined his basic approach to the north on a visit to the German capital.
During last year’s presidential election campaign, Moon pledged to merge the two Koreas’ economies in a single market to lay the foundations for unification.
Park Byeong-seug, a South Korean lawmaker from Moon’s ruling Democratic Party of Korea, said the proposal was in line with Moon’s campaign promises.
“The concept of the three belts was one of President Moon’s pledges during the election last year,” Park said.
“The new economic map includes railway links between the two Koreas and China’s northeast stretching all the way to Europe.”
One part of the plan would involve the construction of a rail link starting in Mokpo on the southwest tip of the peninsula, passing through Seoul and Pyongyang and the North’s Special Administrative Region of Sinuiju, before reaching Beijing.
Beijing is likely to welcome Seoul’s proposal as it accords with the core Chinese national interest of enhancing sustainable economic development and boosting the country’s northeastern rust belt.
Cheng Xiaohe, a deputy director at the centre for international strategic studies at Renmin University said Beijing may try to incorporate the plan into its Belt and Road Initiative.
“The northeast has been China’s weakest link and seen poor economic development for years. A rail link could make a real difference to the region,” Cheng said.
Improving the area’s logistics would also benefit China as its access to the open seas in that part of the world is physically blocked by the Korean peninsula and Russia’s far east.
North Korea’s economy is also closely tied to the northeast of China and opening up the reclusive state’s markets could provide new opportunities for the Chinese provinces on its border.
Lu Chao, a research fellow at Liaoning Academy of Social Sciences, said: “The plan would have a huge impact on China’s northeastern region as it would transform the region as a centre of logistics in East Asia, which could function as a driving force for the rapid economic growth of the region.”
“The northeast is the region with the greatest economic potential in China. A railway connection would bring a myriad of investments from overseas and would help the economy take off.”
[…]
South Korea would have to allow its allies and the UN to mediate any easing of sanctions before it could establish any economic cooperation with the North.
Moon Chung-in, a special foreign affairs and national security adviser in Seoul, said last month that Seoul’s economic incentives would compensate Pyongyang for freezing its missile programme, disclosing its nuclear capacity and allowing international inspections within its borders.

Hyundai Group said Tuesday [May 8th] that it’s setting up a task force to prepare for the potential restarting of economic projects in North Korea.
The announcement comes shortly after a historic summit between South Korean President Moon Jae-in and North Korean supreme leader Kim Jong Un at which they committed themselves to rebuilding ties after years of tensions.
Hyundai Group, which split from the Hyundai Motor Group in 2000, was involved in various business projects in North Korea in the past, including a mountain resort and the Kaesong industrial complex, where North Korean workers made goods for South Korean companies.
“Hyundai needs to be ready when/if the two Koreas agree on terms and inter-Korean economic cooperation resumes,” a company spokesman said.
Hyundai will be closely monitoring the planned summit between Kim and US President Donald Trump that’s expected to take place in the coming weeks, as well as any potential changes to the heavy sanctions in place on North Korea’s economy, the spokesman said.
The Kaesong complex, a symbol of cooperation between the two Koreas, was closed as relations deteriorated in 2016. More than 120 South Korean companies had a presence there, employing tens of thousands of North Koreans and providing a steady stream of foreign currency to the regime in Pyongyang.
Hyundai also previously operated a tourist resort at North Korea’s Mount Kumgang, near the border with South Korea. It was shut down in 2008 after a South Korean tourist was killed by a North Korean soldier.
The company’s ties to North Korea go back to Hyundai’s late founder, Chung Ju-young, who was born there.
Last week, South Korean Deputy Prime Minister Kim Dong-yeon said the country’s government was “considering various scenarios” for economic cooperation between the two Koreas.
“The government is preparing response plans to different scenarios in terms of how and how fast to pursue [economic cooperation] and how to procure the resources for it,” he said.
South Korea’s government has allocated about $900 million to fund economic projects that involve both countries this year, according to the minister.

South Korea’s finance minister said on Wednesday [May 2nd] the government was discussing how to finance possible economic projects with North Korea, although any projects with Pyongyang must first be approved by the international community.
“We’re internally carrying out preparations, in terms of what to prepare, and how to cooperate with the international community, and how to finance (possible inter-Korea projects),” Kim Dong-yeon told reporters in Sejong.
“But we need support from the international community and need to watch the (upcoming) summit between the United States and North Korea,” Kim said, without elaborating on specifics of any government financing.
Kim’s comments come after South Korean President Moon Jae-in and his North Korean counterpart Kim Jong Un agreed last Friday on a common goal of a “nuclear free” peninsula, and to “adopt practical steps towards the connection and modernization of the railways and roads”.
Many speculate that the two Koreas will start joint infrastructure projects as soon as international sanctions on North Korea are lifted. Currently, North Korea is under sanctions imposed by the U.N. Security Council to stop its nuclear weapons and missiles programs.
Kim also said there was a rise in the number of Chinese tourists in March although the services sector has not yet recovered from a drop in such visitors due to tensions between the two countries.
“The number of Chinese tourists is noticeably increasing since March, although it hasn’t recovered to the pre-Thaad level,” Kim said.
Tourist numbers plunged last year after South Korea angered China by deploying a U.S. Terminal High Altitude Area Defence (THAAD) system that features radar which Beijing believes could be used to penetrate its territory.