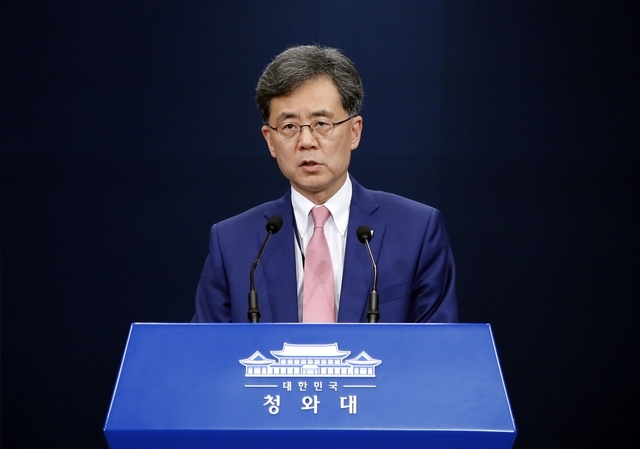 “Considering that our two countries have shared the values of liberal democracy and market economy for decades, Japan’s removal of South Korea from its white list on the pretext of security can be regarded as a public slap in the face”

“Rather than assisting South Korea in its efforts to get the peace process underway, Japan has thrown up roadblocks to that process. Japan opposed delaying the South Korea-US joint military exercises around the Pyongchang Winter Olympics and maintained that sanctions and pressure were the only solution even while dialogue and cooperation with South Korea was underway. It also tried to raise tensions by calling for Japanese citizens residing in South Korea to rehearse a wartime evacuation,” Kim said during a briefing on the afternoon of Aug. 2.It’s unusual for a figure at the Blue House to openly state that Japan presents an obstacle to the creation of peace on the Korean Peninsula. Such remarks indicate that Blue House officials are fuming over Japan’s removal of South Korea from its white list of countries who enjoy expedited export procedures. “We ought to give some serious thought to the meaning of the peace and prosperity of the ‘normal country’ that Japan seeks to become”

“We need to carefully consider Japan’s rationale and motivations behind its removal of South Korea from the white list — are they economic, political, or both at the same time?”“Given such considerations, we need to give some serious thought to the potential effectiveness of the US attempting to bring Japan around.”

This website uses cookies to improve your experience while you navigate through the website. Out of these, the cookies that are categorized as necessary are stored on your browser as they are essential for the working of basic functionalities of the website. We also use third-party cookies that help us analyze and understand how you use this website. These cookies will be stored in your browser only with your consent. You also have the option to opt-out of these cookies. But opting out of some of these cookies may affect your browsing experience.
Necessary Sempre abilitato
Necessary cookies are absolutely essential for the website to function properly. This category only includes cookies that ensures basic functionalities and security features of the website. These cookies do not store any personal information.
Non-necessary
Any cookies that may not be particularly necessary for the website to function and is used specifically to collect user personal data via analytics, ads, other embedded contents are termed as non-necessary cookies. It is mandatory to procure user consent prior to running these cookies on your website.
ACCETTA E SALVA
error: Content is protected !!